On Thursday afternoon I dropped Alexis off at my parents’ place and drove to pick my husband up from work, we were going on a date. Not just any date, we were going to a themepark, just the two of us, at night. There was going to be ice skating, and snow, it was going to be fun. We were going let our hair down, ditch responsibility for a few hours, and have a ball. We had been looking forward to this for weeks. I was thinking about all this on my way when I thought to myself, “no noise coming from the back, maybe bub has finally fallen asleep”, and turned around to check, noticing the empty car seat. Mental face palm. I am ashamed to say that I checked on that empty car seat twice more on the half hour drive to pick my husband up from work.

On the way I was nearly wiped out by a woman in a 4WD. I was mentally writing my next blog entry, a rant entitled “wife driving hubby’s car” when it occurred to me that as I was also driving my husband’s car, and checking on empty car seats, so did not have much authority on the matter.

I picked Corey up, well actually he drove from then on, and settled down. It was not so foreign to accept that Alexis was not with us once Corey was with me. It had been weird on my own. Was it that I get such little time on my own that I’m not so sure of my own company? Or is it more likely that I was so worked up from trying to get there on time and the incident with the 4wd gave me a distraction? What those without kids don’t know is when you have a baby going anywhere is a major event. I spent all day running around preparing for a few hours out. I had to get everything ready for Alexis, reminding myself to not forget anything. Last time we left her we had forgotten the breast milk, and although we had provided emergency formula and a bottle of water for it just in case, we had forgotten a teat! So this time I was determined to not be such a failure. I stressed myself all day. (I ended up forgetting the formula this time.)

I had also gathered a bag of winter woolies for us. Mittens, scarfs, beanies, jackets. Although it is summer, the add said ice skating and real snow. I didn’t want cold to ruin our night, I wanted everything to be perfect. 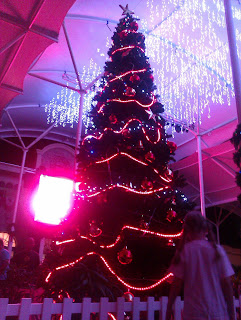 Imagine my disappointment when we arrived to discover the “snow” was a bubble mix and the “ice” skating was on plastic. It was hot. I sweated in jeans and long sleeve shirt. The embarrassment didn’t end there. The rink was outdoors where they had just had a show. The thousands of spectators stayed to watch the twenty (ish) of us who had paid to skate. I can’t skate. I was being overtaken by small children. Corey can speedskate. He dragged me around, screaming behind him as we weaved around the others. It was so embarrassing but it was so fun. I was out of my comfort zone. I was making a fool of myself. That moment was scarier than any of the roller coaster rides we went on that night. But I was safe in his arms. I trusted him. We were having fun, who cares how ridiculous we looked.