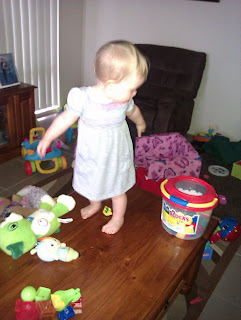 Corey and I are in the process of talking about whether we should think about moving Alexis from a cot to a "big girl" bed.  Like all big decisions to make there are pros and cons. Like all stages of Alexis' development I am both excited and nervous at the same time. As per tradition around here Alexis is, on paper, perhaps a little young, but in practice I think the time is nearly upon us. Here are some factors we are discussing.

(The "bun in the oven" factor: baby needs her room)
Baby number #2 is due to arrive in late October. Due to the layout of our house, Alexis will be required to move to the room further down our labyrinth of hallway so we can have newbies room closer us. Newbie will be in a bassinet in the master bedroom with us for as long as possible, but we don't know how long that will be because Alexis outgrew the bassinet so quickly.

(We need the cot)
Buying a second cot seems dumb financially in our situation when Alexis will need a bed in the not so distant future anyway. Her cot does convert into a toddler bed but it seems a little futile to change rooms, then change her to the toddler bed, then move her to a real bed in a year anyway.

(Efficiency/laziness)
It seems better to get all the moving done at once, both to minimise the amount of work for us in setting up the new room and to minimise wear and tear on our cot.

(The night and day possibility)
By starting early and leaving her current nursery set up as it is we have the ability to do what we did when we transitioned from bassinet to cot. We kept Alexis in our room in the bassinet at night but put her in the cot in her new room for day sleeps. Corey and I did this purely for our own benefit of course. We wanted to know we could trust the cot and that she wouldn't spontaneously evaporate being "so far" (in our old house she was on the other side of our bedroom wall) from us.

Similarly I can trial her in the bed and the further bedroom during the day while I'm awake to "run to her" if there's any dramas while still sleeping soundly knowing my princess is contained at night. Eventually she will ask us to put her in the bed at night by going to that room. That's the theory.  I'm so optimistic at 4am, lol.

(The "shiny new things" bribe)
Of course our main concern is Alexis. We feel that based on her personality if we offered her the same furniture in a new room she would miss her old room and get confused. We are hoping that we can woo her with brand new "big girl" furniture and she can view the transition as exciting, new, special… Her reward for being a "big girl).

(The size factor/she is ready)
As I mentioned earlier, Alexis outgrew the bassinet very early. She would wake herself up by hitting the walls. She learned to roll over quickly. She learned to pull herself up to sitting using both sides for leverage very early. We worried she would tip it over. Alexis (and we) slept so much better once we moved her from bassinet to cot.  We've seen this pattern of cramping before.

Alexis moves around in her sleep. Now she is waking herself up whacking into the sides of the cot. So often I find her little legs stuck hanging out the sides of the cot, searching for freedom. She bangs her head on the top of the cot at least once a night too. Some friends of ours suggested a cot bumper. I was weary because of the risk of suffocation/smothering. Corey is not a fan for other reasons: he thinks she would use it to climb out of the cot. This is the same reason why we don't give her any toys in her cot. (I know we're mean, but she is an enthusiastic climber. She climbed onto the coffee table…).

(She hates her cot)
Alexis doesn't like the cot. She doesn't like to feel trapped (gets that from her mumma). On the numerous occasions we have tried to introduce her to self-settling she has not responded well. She stands there screaming, banging (hands, feet, head.. she doesn't discriminate), bashing, trying to get out, and lately she's discovered she's the perfect height to rest her chin on the rail and mock decapitating herself. Charming hey.  Mummy's little angel has mummy's little fuse, unfortunately, but I suspect she legitimately doesn't like it. Even when asleep she seems to tense when we put her in a cot.

We are hoping that a bed will be easier. We can teach her how to slide out safely like she already does off our queen bed. We hope once she gets through the initial buzz of being able to get up and play whenever she wants she will settle down and sleep well.  We should only have a few nights of raging parties right? (Naive much?)  I'd rather she is up playing than up at the sides of the cot screaming for me!

(Safety)
The main reason parents keep toddlers in cots is they are afraid they will fall out of a bed. Yes it is true that toddlers move around a lot in their sleep. The risk of falling out of bed is a real concern. This is the main reason I am reluctant to move her to a bed so young (she's 14 months at the moment).  HOWEVER, we feel that the possibility of Alexis trying to climb out of her cot and having an accident is also very real.  She has already shown signs. If she falls clumsily off the top rail of the cot the damage will be worse than if she rolls off the side of a bed.

We are hoping to minimise potential incidents by purchasing a bed that is not too high off the ground, doesn't have sharp corners, is wooden not metal, has no gaps she could get stuck in, and supports a toddler safety rail.  I haven't done any research into the use of safety rails yet, so if you have and want to share your experience please do. Corey's mother used them with him and recommends them. Apparently he was in a bed by his first birthday because he was a monster in the cot but loved the bed.

(The Karlee is fat and unco and it’s only going to get worse factor)
As I progress into the pregnancy, lifting Alexis into and out of the cot is going to become a difficult task. A bed will be more convenient for me (apart from the fact she can run away). I am looking forward to being able to snuggle up beside her and read her stories in bed rather than her sitting on my lap (which more often she climbs up my gut or it puts much pressure on my pathetic bladder…). I'm also strongly hoping, call it blind optimism, that she will fall asleep like that instead of me feeding her to sleep in a chair then transporting her to her cage, I mean cot, I mean bed.

So there's lots of pros with only a few cons. Yes letting a 14 month old loose to get up and walk around at night is playing with fire. We think we will block her doorway off with a safety gate so she's at least confined to her room. Also we have to combine the study and spare room to make a room for Alexis (no we don't want her using Corey's king single bed because it won't fit in the room we want for her and the room it's in is not suitable for a small child) and that is daunting. There's also a possibility that she will fall out of bed and get hurt, but I hope that ouchy wouldn't be as bad as her falling awkwardly trying to climb out of the cot.

Apart from this there's a sale on at a furniture shop and from looking online there's some gorgeous stuff there. I love furniture shopping! It's all very exciting.

What do you think? What's your experience with moving your kids from cot to bed?